On Day 3 at FOSS4G-Asia, different open source projects were presented to the crowd, such as: Geopaparazzi, Tadpole SDM and Policrowd 2.0. 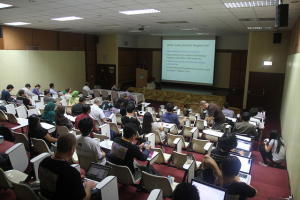 First, Geopaparazzi is an Italian Android project to do field survey, but also tools that can be of great use also to OpenStreetMappers as well as tourists that want to plan their trip.  Some can see Geopaparazzi  as an apps similar to OSMAnd, even if the clients at first were not the same.

Secondly, Tadpole SDM has been shown for the first time at FOSS4G-Asia. It is a web-based UI in Java to manage spatial database based on Tadpole DB. It is at early stage, so it only supports PostGIS for now, but they plan in three years to support Oracle, MySQL, SQL Server and Spatial Lite. It can manage spatial data, work as Saas, draw query geometry quickly, show select row table, display which database objects has spatial data.

Thirdly, Policrowd 2.0 has been recently released and extending its uses. It is a social platform over Nasa WorldWind and Open Data Kit as a GIS participatory web application, allowing users to populate a virtual 3D globe with their personal geospatial information and with OGC compliant service (ex. WMS).

Finally, governments were also part of the development and user process at FOSS4G-Asia, especially in South Korea and Quebec in Canada. South Korea just release its Open Source Geospatial Policy by sharing resource in GIS and find better ways to collaborate. South Korea launch also a government funded R&D program of over 9 million with goals of developing and enhance their GeoEcosystem with github platform, KAOS-G forum, new project architecture based on GeoTools-GeoServer-OpenLayers, process Spatial-Statistics and collaboration with Kazakhstan Government. In Canada, the government of Quebec with its new project called: Open GIS Infrastructure (IGO in French) has also been presented. IGO includes: (like South-Korea) a collaborative platform (Gitlab, Redmine), project governance based on UMN MapServer committee rules and target at sharing expertise, documentation and resource within the government. This IGO project involved 6 organisations in Quebec. It develops WPS spatial analysis tools (based on Zoo Project), security management on layers, an API over OpenLayers, Geoext, MapServer using Phalcon as Integrator model. This project will enable anyone to configure by a simple XML its own web map application including Base Map and WMS/GeoJSON overlays in a layer tree and adding different built-in functionalities (ex. adding WMS server on-demand, share permalink, location tool) to the apps without any lines of javascript. The source code of IGO should be released in as a LGPL licence and the government of Quebec is looking at other public administration (local, regional and national) in Canada or elsewhere to get involve or contribute to the project.

For the last day of FOSS4G-Asia a sprint code was held on Zoo Project to continue enhancing this open WPS platform.