Here is a press release from the geOps website : 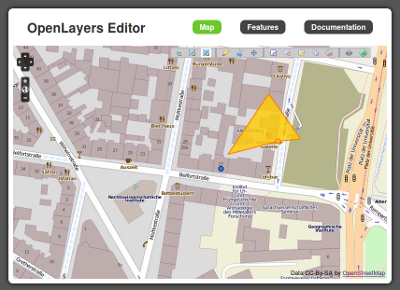 OpenLayers Editor is an easy to use JavaScript library that brings geodata digitizing functions to the browser. Besides basic capturing of point, line and polygon data, OpenLayers Editor supports the upload of shape files, snapping, merging, splitting and validation of geometries.

END_OF_DOCUMENT_TOKEN_TO_BE_REPLACED

Via the OSGeo-Discuss list I learned about the release of the open source library MapQuery 0.1. Here's the official mapquery website.

What is MapQuery? "MapQuery is a pure javascript based library which builds upon OpenLayers, jQuery and jQuery UI to provide an easy to use webmapping library. It is meant for jQuery application developers who want to build Rich Internet Applications (RIAs) with maps. Currently it provides a few basic widgets to create functionality around a map and an easy API to write your own widgets."

Here's more on its goals: "MapQuery formally extends OpenLayers, it is similar in concept as GeoExt, but uses jQuery instead of Ext. The idea is to create a jQuery-style webmapping library which wraps around OpenLayers and extends it with functionality like layer managers, datagrids (NYI), legends etc. We try to make it easy to create a webmap-application with OpenLayers, without having to know all that OpenLayers has to offer.

We aim at jQuery developers more than on people who are already well-versed in OpenLayers. As such we will provide a few simple functions which (we think) will be enough for 90% of the use-cases. The other 10% is not actively pursued, though one could directly access OpenLayers and do some of the advanced stuff we're not providing."

END_OF_DOCUMENT_TOKEN_TO_BE_REPLACED

Here's the recent geonews in batch mode, covering almost two weeks worth of geonews. I'm voluntarily leaving Esri-related geonews out for an upcoming entry specifically on their user conference.

END_OF_DOCUMENT_TOKEN_TO_BE_REPLACED

Here's the recent geonews in batch mode, covering the last 10 days. From the open source front:

From the Esri front: From the Google front: In the miscellaneous category: In the maps category: END_OF_DOCUMENT_TOKEN_TO_BE_REPLACED

anonymous May 18 Comments Off on ThinkGeo Deploys Map Suite 5.0, Asks For Community Input on Enhancements

ThinkGeo has updated all of the products in their Map Suite line this month to version 5.0 and has included a variety of new features, many of which are aimed at making their GIS software suite compatible with a wider range of data types, including TAB and projection metadata (PRJ). There's also built-in support for Bing Maps in every product, and the Map Suite Web Edition product gets upgraded to OpenLayers 2.10 and Google Maps API version 3. The full release details have been posted on ThinkGeo's developer blog. The company has also invited the community to submit and vote on suggestions for enhancements to future releases of Map Suite, for which they have set up a site called the ThinkGeo Enhancement Tracker. You don't have to log in or anything, so it's easy to head over there and vote on stuff you think Map Suite needs.

END_OF_DOCUMENT_TOKEN_TO_BE_REPLACED

Satri April 20 Comments Off on Review of OpenLayers 2.10 Beginner’s Guide

Geoweb Guru offers a review of OpenLayers 2.10 Beginner's Guide by Erik Hazzard. From the review: "The book is written as a tutorial but also includes API reference material. The author does a good job of blending these two approaches. Each section of discussion and reference text is followed by "Time for action" (implementation example), "What just happened?" (explanation), and "Have a go hero" (exercise suggestions for modifying the code). [...] In contrast, the chapter on FireBug is welcome. It is only an introduction, but many web developers (myself included) tend to hack Javascript with nothing more than a text editor." We regularly mention OpenLayers.

END_OF_DOCUMENT_TOKEN_TO_BE_REPLACED

Here's the recent geonews that we haven't already mentioned in batch mode. In addition to last Friday's FOSS4G geonews:

In the miscellaneous category: In the maps category: END_OF_DOCUMENT_TOKEN_TO_BE_REPLACED

From the ESRI front: In the miscellaneous category: In the maps category: END_OF_DOCUMENT_TOKEN_TO_BE_REPLACED

"It is now possible to visit the Mobile Examples for OpenLayers directly by going to: -- Chris"

END_OF_DOCUMENT_TOKEN_TO_BE_REPLACED

Maperitive is a free desktop application for drawing maps based on OpenStreetMap and GPS data. It is a simple to use alternative to renderers like Mapnik. It runs on Windows, Linux and Mac. One of the more powerful features is scripting support which enables automating various map rendering processes, like generating Web tiles and uploading them to an FTP server. Features include: